My journey from Havana to Merida, Mexico should have been pretty straightforward; a 21/2 hour direct flight. However when I walked out on to the Cuban runway, in the searing heat, I wasn’t entirely sure that I was going to make it. My transportation was the oldest plane, barring a Spitifre, I have ever seen. It had 2 dirty propellers and the fuselage looked like it had skidded along a runway on numerous occasions. Before boarding I took a quick selfie and sent it to my family, so that if I did disappear over the Gulf of Mexico they would know why. My concerns over flight safety were heightened when I noticed that the plane had ashtrays in the arm rests which, on inspection, had not been cleaned out.

I was very relieved when, just over 2 hours later we made a bumpy, noisy but nonetheless safe landing in Merida. There were only 28 people on the flight which was probably due to the particularly appalling safety record of this lesser known airline. I wrongly thought that this would mean a quick passage through the airport.

Unfortunately the Mexican authorities were understandably suspicious of anyone travelling from Cuba and particularly young men. The 2 guys in the border control queue in front of me were scrutinised by officers, had their photos taken and then the officers disappeared into a back office for 20 minutes before returning with a pile of papers to be signed. In comparison my interrogation was very brief. Clearly they didn’t think an ancient blonde Brit posed much of a threat to national security.

I grabbed my bag, which I was pleased to see had not been stolen from the carousel in the 2 hour border control delay, and I headed toward the exit. It was then that I realised that I had to put all my luggage through another scanner. Ok, I wasn’t exactly smuggling drugs, but I was carrying a good selection of vapes which I knew were illegal in Mexico. In an instant my bag was seized and I was taken into a small office. It was at this point I considered that my next blog could be posted from the inside of a squalid Mexican jail. The stern looking officer, complete with machine gun, asked me what the value of the vapes were, which he had carefully laid out on the table like a haul of cocaine. I looked at them intently and announced they were worth $80. I debated whether the value of the haul would equate to the amount of time I would spend incarcerated.

To my utter astonishment, and relief, the officer looked up and said, ‘if you give me $100 you can have them all back.’ I cannot describe the sense of relief I felt when I handed over the bribe to the bent official and banished all thoughts of handcuffs from my mind. When the transaction was complete, I was released and I counted my lucky stars as I headed out of the exit to freedom. When I recounted the story to my poor driver who had been waiting for hours, he simply said ‘Welcome to Mexico. It’s a good job you did pay the fine, otherwise you would have been arrested!’ 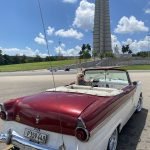 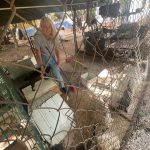