My journey from Ecuador to the Galápagos Islands was far from straightforward. Firstly, I had to catch a plane to the tiny island of Baltra, which is only the length of the runway and the airport terminal. So if a pilot gets it wrong his plane ends up in the Pacific. I was on a big plane so, needless to say, it was a heavy landing following by a deafening screech of brakes and screams from nervous passengers.

Once through the tiny terminal, I caught a bus to the edge of the island where a small boat ferried passengers 200m across the sea to the island of Santa Cruz. This should have been a pleasant little crossing, but the majority of the passengers were short, plump Ecuadorian ladies with massive suitcases and even bigger behinds. I had a suffocating 5 minutes squashed between such two senoras and 4 suitcases, on a 3 foot long bench.

When I was able to breath again, I jumped into a pick-up truck/taxi for the 45 minute ride to the harbour. I then took another boat for the 2 hour trip to my destination, the island of Isabela. Having been warned that this crossing was very bumpy I had wisely taken some sea sickness tablets. It was a good job I had. The boat provided nothing except a sick bag to each passenger and I spent a miserable couple of hours being sprayed by surf and airborne vomit.

After what seemed like an eternity, Isabela island came into sight, complete with penguins playing on the rocks in the afternoon sun and sea lions paddling in the harbour. I knew instantly that the arduous journey had been worth every minute.

I was met from the boat and taken to meet the other international volunteers, many of whom were older than the usual Gap year students I encounter. Much as I love young people, it is actually quite refreshing to not feel like the Granny one of them has had to bring along to the party. Ok, I admit that I am still the oldest by ten years, but at least this bunch have heard of Pink Floyd.

The next morning I started work at the Galápagos Turtle Breeding Centre where tortoises are bred in captivity to re-populate the islands with this critically endangered species. 330 tortoises from new borns to 150 year old seniors live here, but the majority are released into the wild aged 3.


I think it would be fair to say that these creatures are not the best lookers on Earth, they are also incredibly stupid. Even in a vast enclosure, if one tortoise wants to get somewhere and another is in the way, they will climb over each other rather than go round. Unfortunately this sometimes results in one of them toppling over and lying upside down with legs flaying.  It is very extremely difficult for them to right themselves, as they are so top heavy and in the wild they often simply die.

My job includes sweeping out the enclosures, feeding the tortoises on banana leaves and numbering their shells. Picking up tiny baby tortoises and trying to paint their shells is a most curious job. They wriggle and squirm to get free and, understandably, they pee out of the sheer panic of being suspended in mid air. I am proud to say that I am one of very few people who can say they have been peed on by a Galápagos tortoise. 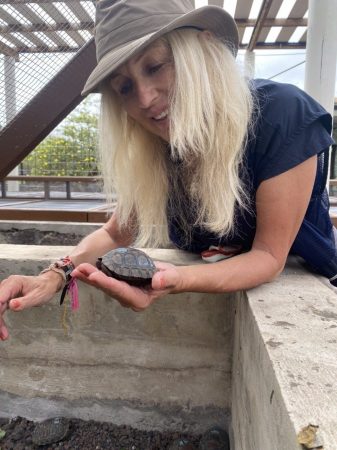 After work, afternoons are spent as you would expect in such a divine location. We sit on deserted beaches, snorkel and marvel at the vast array of wildlife we live amongst; from flamingoes, pelicans, penguins and sea lions to turtles and iguanas. I think I rather like it here.. 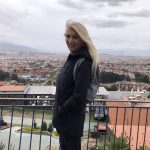 Trouble in the Mountains 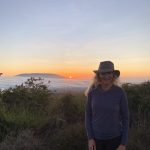 Sleeping on a Volcano