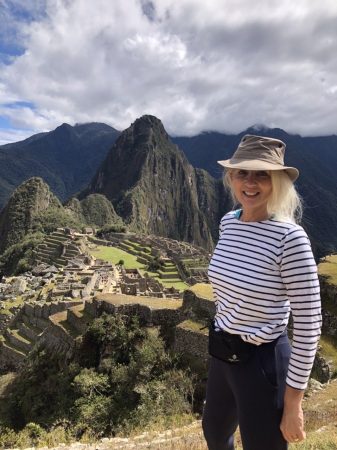 My time in Peru is coming to an end as I leave for Ecuador tomorrow. My time here has been filled with highs and lows; from the elation of trekking up to Machu Picchu to the lows of witnessing the misery of so many street dogs.

Maccu Picchu is one of the Seven Wonders of the World and the ‘Lost City of the Incas.’ It was abandoned in the 15th century and not discovered again until 1911. The architecture is an absolute masterpiece. How the Incas managed to build a beautiful city out of blocks of rock 2400m up a mountain is unfathomable. They were way ahead of their time.

Interestingly Peru has daily earthquakes as it is situated on a fault line in the earth’s crust. For the past 500 years numerous catastrophic earthquakes have destroyed newer buildings but those built by the Incas never budge.

Whilst I have tried to dress like a student here it would be hard to say I have ‘blended’ into the crowd. Peruvian people are extremely short and dark, and foreigners are pretty sparse at present. Even with a double face mask and a hoody I have had some very strange looks.

Last week my driver, Billy, got pulled over by a motorcycle cop who had spotted me in the back of his car. Billy had to show his documents and I had to show my passport. After much arm waving and rapid Spanish talking we were sent on our way, much to my relief. I really didn’t want to be sentenced to 5 years in a Peruvian jail just for being blonde.

This week a new volunteer started at the dog shelter, a lovely guy from the U.S. called Will. However his first day didn’t quite go to plan. As he was trying to tie two bits of wire together to secure one of the enclosures a dog escaped and bolted into the next enclosure. All hell broke loose as this poor dog was set upon by 8 others. It was a horrific scene. Will waded straight in to break up the fight and got badly bitten, whilst I was dashing off to get a bucket of water to throw over the marauding pack.

When things finally calmed down, Will emerged with blood pouring down his hand. The next minute I was doing a Florence Nightingale with some hand sanitizer, a tissue and a hair band. I casually said to the traumatized Will, ‘You have had your Rabies vaccination haven’t you?’ To which he replied ‘Oh no, it was too expensive in the U.S.’

I can’t actually repeat the first words that came into my head, but I had him in a taxi ‘pronto’ and we headed to the Medical Clinic which alleviated him of several hundred US dollars. I am pleased to report that Will is still with us, but sadly the dog which was attacked has taken refuge in a kennel and currently tries to attack any dog or human in the vicinity.

The following morning we headed to a local market to buy food for the dogs. Every day Maria, who runs the shelter, cooks a massive vat of soup for the dogs over an open fire. The soup contains assorted parts of a cow’s anatomy and vegetables and rice. The dogs love this tasty broth and it does make me feel very guilty that my pampered middle class pooches live off Pets At Home convenience food.

The local market certainly was an eye opener. Chickens and Guinea pigs were alive one minute and being roasted on sticks the next. Guinea pig is the national dish of Peru and pops up everywhere, even on top of pizzas. Every time I am asked whether I like Guinea pig I reply, ‘Si com una mascota!’ – ‘ Yes, as a pet!’ 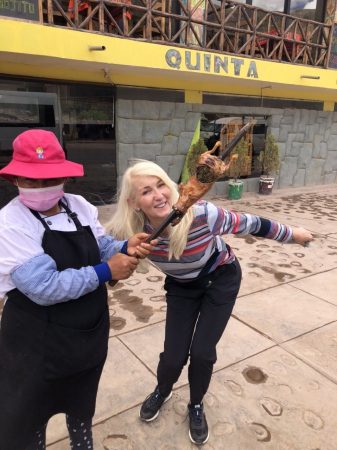 Apart from the use of small furry creatures, Peruvian food is a delicious fusion of Mexican and Asian dishes. However Peruvian water must be avoided at all costs. One inadvertent lump of ice could result in a 2 day residency in the bathroom and no need for colonic irrigation ever again.

See you in Ecuador… 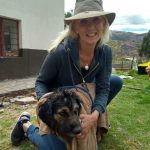