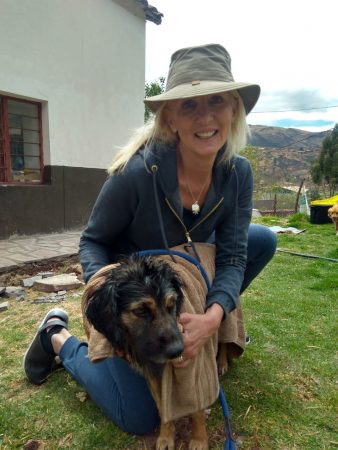 Well I have settled into a routine in Cusco. I spend the mornings working in a dog rescue shelter and I have Spanish lessons in the afternoons.

I use the word ‘shelter’ loosely. This is more of a dog rescue ‘shed’ high up in the Andes, about 40 minutes from the city. An amazing old Peruvian lady, Maria, set up this shelter 4 years ago to try and tackle the street dog issue here. To be honest about a 1000 shelters would be needed to make any headway with this tragic problem.

When I first arrived I was a bit shocked. I knew it was going to be basic but just not quite so basic… The entire place is held together with string, bits of wire and plug chains. When the wind blows the tin rooves do, literally, blow off.

On my first morning Maria asked me to go into one of the enclosures to feed 8 residents. I untied the door and was immediately flattened by a large German shepherd-type dog who was clearly overly pleased to see me. He managed to split my lip, lick my face and run off with my hat within 3 seconds. I jumped to my feet, lip bleeding, and spent several frustrating minutes chasing this bloody hound round and round as he trotted along with my hat in his mouth. In desperation I threw a huge handful of dog biscuits at him. He decided this was a fair swap and reunited me with my precious head gear in an instant. At that moment I was highly delighted that I was stuck half way up a Peruvian mountain and not anywhere where my misfortune would be shared on Tik Tok by lunchtime.

My time here is spent feeding and watering the dogs, picking huge bugs out of their fur and washing up dog bowls. On my second day I appeared with a large pair of yellow Marigolds as washing 25 dog bowls in a bucket of cold water, with bare hands, meant I was worried about catching more than Rabies. My other work attire purchase has been a pair of Crocs. Under normal circumstances I would rather kiss Donald Trump than be seen wearing these, but after a shift here everything, including me, needs to go on a 90 degree wash cycle. I did actually try to Photoshop the Crocs out of my photos, but I looked even more ridiculous without any feet. 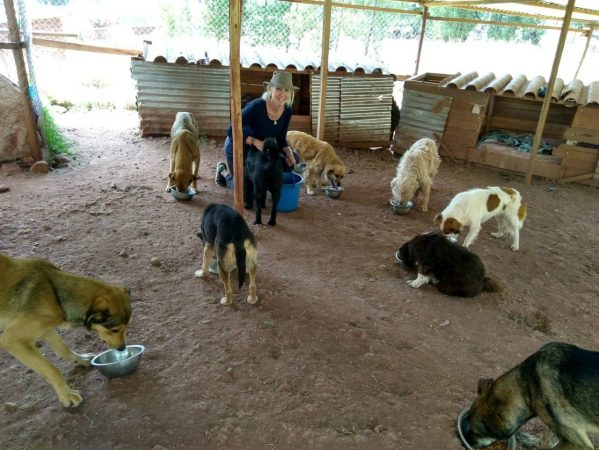 The amazing Maria toils day after day, on her own, looking after between 25 and 50 dogs with the sole aim of re-homing them. Unfortunately these dogs are street dogs and when they are re-homed they still want to live like ‘street dogs’. They chase sheep, eat chickens and fight with other dogs, rather than curling up on sofas watching Netflix. The result is that many are returned here after only a brief stint of domesticity.

In reality these dogs have what all mammals need ie food, shelter and warmth but there just isn’t enough love to go round. If you have a doggie go and cuddle it now and tell it how damn lucky it is!

All Creatures Great and Small