Life on the Maldivian island of Naifaru, which I have nicknamed ‘Turtle Town’ moves at a leisurely pace, yet the days are flying by. Every morning the team does a 4 hour shift cleaning the turtle tanks, refilling them, and feeding the Maldives turtles and baby hatchlings.

This is hard manual labour, carried out in the searing heat, but it is good fun. There is great banter and loud music blares out continuously from a rusty speaker. I was very anxious when it was my turn to put on my playlist for these youngsters, as it is usually met by ‘Oh Gawd Mum PLEASE!’ at home. I am pleased to announce that this gang had way better taste. They announced that they loved all my melancholic toons, unless they were being terribly polite to ‘Granny.’ I did do a quick ‘fast forward’ before Shirley Bassey though…

By lunchtime I emit a strange fragrance, comprising poo and Dettol, which certainly won’t be a bestseller this Christmas. To respect local customs I have to carry out this sweaty work with my shoulders and knees fully covered. I soon decided that running gear was the best attire, as it dries quickly, plus I can wear it to jump into the sea mid-shift, if it all gets too much.

On my first morning I was given a bowl of raw tuna and told to feed a turtle. ‘They don’t bite do they?’ was my first question. ‘Not if you do it properly’ came the response. I clearly didn’t, as seconds later I virtually had my middle finger severed by a grumpy old bugger called Noel. I have never screamed ‘Jesus Christ’ quite so loudly.

Thank goodness for a Muslim population. My first thought was ‘how am I going to write my blog without a middle finger?’ ‘Those shoes’ would read ‘Th_se sh_es.’ Everyone laughed hysterically as I confirmed that my finger was still intact, but looking very red and my ‘Sunset Glow’ nail polish had been sliced right through.

Despite this poor start I have fallen in love with Noel, and clean his shell regularly with a hand brush, whilst repeatedly being told ‘I make a good scrubber.’

The work the team do at this charity is incredible. The marine biologists come for 6 to 12 months, without any pay, and they have the most basic accommodation and awful food. They are so passionate about the cause, and work tirelessly as a steady stream of mutilated turtles arrives.

These have usually been caught in ghost nets which are disused fishing nets abandoned in the sea. Some have been trapped for weeks and have severed their flippers in an attempt to escape. Once a turtle is caught it is very hard to extricate, as it involves cutting them free with a knife, underwater, whilst they flail around. Most fisherman don’t bother, and leave them to die, so it is usually dive teams who bring them in.

Only turtles with at least one front and one back flipper remaining can ever be released again. Consequently there are always battles to find permanent homes in aquariums around the world for the unlucky ones. Noel might be coming to Sea Life in London, and if he does, I will be first in the queue.

Shockingly only 1 in a 1000 baby turtles make it to adulthood.  This is due mainly to the manmade threats of global warming, poaching and plastic pollution as well as the nets. I knew so little about these awesome creatures before, but now I am hooked on them. I forgive them for all the poo and finger amputations. We humans have way more to answer for… 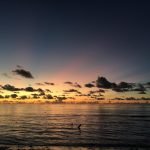 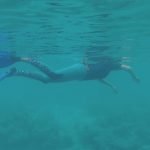