Preparations for my Trip over the past few months have been extensive.  Firstly, I had to make the announcement to Husband.  Normally when I say ‘Darling’ in a semi sexy voice over supper, I am about to admit to yet buying another Ralph Lauren shirt, or some Take That tickets.  This time the ‘Darling’ was sexier than ever… Husband coped very well with the announcement that his wife of 23 years was buggering off to Asia for 3 months to find herself. He knew there were midlife crisis stages, but he just wasn’t sure which one I was in.

I actually think he saw a green light for more tennis matches, meals out with the Boys and to get his motorbike licence.  Which led me to believe he, in his own way, is having a mini midlife crisis too.  My grown-up kids, to be honest, were shocked.

Reliable Mum, always at the end of a WhatsApp message and ready with a roast dinner when required, was doing something so “un-Mum-like’ they could hardly believe it.  Eyes widened, mouths opened, then eventually came the words ‘Mum, that is so Cool!’  Rarely in all my years as a mother, have I done anything is my kids’ eyes which is ‘Cool’, so I am taking this one and I am taking it Big Time.

Worryingly my friends all asked the same two questions, and in the same order ‘What will you do with your hair?’ and ‘What does Husband think?’ I told them I was going to tie up the first and might well do the same to the second.  Why do my friends think my peroxide bob comes before Husband?  That is worrying.  I guess I can at least hide the fact that one is very grey.

I have also had to cope with a lot of pricks lately, and I don’t just mean the guy in the camping shop who tried to sell me a £350 sleeping bag.  No, I mean vaccinations!  I have actually had so many that if I keeled over in the high street and someone saw my arms, I would be carted off to the nearest rehab centre. 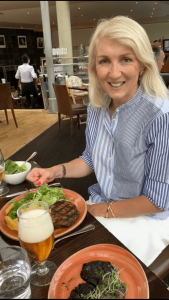 A nice lunch out before I go…

I thought Japanese Encephalitis was something on the menu at YO! Sushi but, it is in fact, a rare, but often fatal brain disease, carried by mosquitos and it requires 2 bloody great needles full of serum to prevent it. I have also had 3 jabs for rabies and guess what?  It actually does not STOP me catching rabies!  It just means that when I fall to the ground, foaming at the mouth and barking with a limp tail I have more time to get to hospital.  Great….! 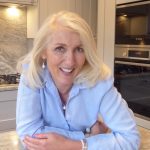 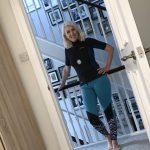