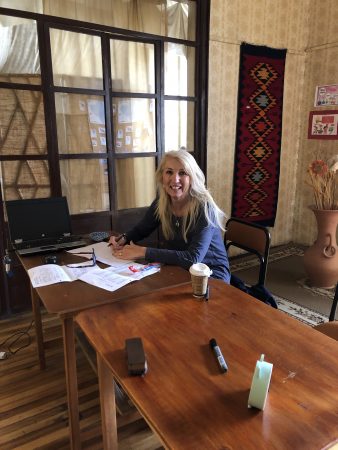 After I made the tough decision to leave the turtle project in Las Tunas the next problem was where to go for a week before I flew to the Galápagos Islands. Ecuador is a dangerous country to travel around, even by car, as drug cartels are known to set up road blocks to stop and randomly rob motorists. There were even five muggings on the Interstate bus that week, which left me with a real dilemma. In the end I hired a taxi company I found on TripAdvisor and made a very stressful 7 hour journey across country to the beautiful historic city of Cuenca.

I checked into a lovely little colonial boutique hotel right in the heart of the city, and enrolled the next morning at a Spanish language school. This really was the most extraordinary place. It was a wonderful old building, which I am sure in its day looked exquisite, but which now sadly resembled the sitting room of an eccentric great aunt who had fallen on hard times. The wallpaper was hanging off the walls, the light fittings were rusty and the curtains were in shreds.

My Spanish teacher was a bossy lady called Maria. When I went into my first lesson I thought I was doing rather well with the lingo but after 5 minutes she told me that my grammar was terrible and my accent was incomprehensible. I thought this was a bit rich coming from someone who called me ‘Jay eme,’ but I took it anyway. Each day I had 3 hours of classes and then in the afternoons a lady from the school took me on cultural trips around the city.

Many Americans retire here as the place is safe, the cost of living is very low and the health care is peanuts. I saw a hell of a lot of wrinkled and tanned Yanks that week, wearing socks with sandals and baseball caps. In the evenings I amused myself for hours sitting in restaurants and eavesdropping on their conversations.

The owners of the hotel were delightful. They had never had an English guest before so they really spoilt me. I had the best room complete with balcony, a huge double bed and a shower powerful enough to blast me into the next room.

One night I was rudely awoken by a bunch of Spanish tourists who crashed in at 12.30am and then decided to have a party on the galleried landing outside my room. They finally staggered off to bed at 3.00am and I drifted back to sleep.

Suddenly, I heard the sound of running water and thought ‘Oh Christ! They are all having a communal shower now!’ After half an hour the gushing sound was getting louder and louder. I opened my door to see an absolute torrent of water pouring through the ceiling and cascading over the balcony onto the lobby below. I literally had to wade down the stairs and bang very loudly on the owner’s door. He appeared promptly, wearing only underpants, and all I could think to say was ‘Agua! Agua.’ He looked up in disbelief and dashed upstairs.

I returned to my room and just sat listening to the pandemonium unfolding. I poked my head out of the door at one point, and was told to get back inside as the ceiling was about to collapse. Playing the theme tune to ‘Titanic’ on my phone seemed the only appropriate thing to do to while away the hours.

The next morning, when I felt it was safe to appear, the hotel did in fact look like a scene from the latter stages of that movie, but at least the water had stopped.

I checked out the following day, and was delighted to discover that I hadn’t been charged for 3 bags of laundry and several bottles of water. The owner said he saw me as the heroine who had saved his hotel. I do have my uses, even if my Spanish grammar is rubbish…

Trouble in the Mountains