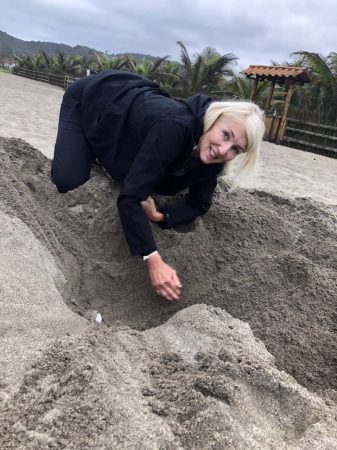 Once I had recovered from the shock of my roadside encounter with a Tarantula, I arrived safely in Las Tunas, a tiny fishing village on the North coast of Ecuador, to work on a turtle conservation project.

Ten years ago the small community became very concerned that so few turtles were laying eggs on the beach there and turtles numbers were dwindling. They realized that this was due to two things; firstly, the amount of plastic rubbish on the beach and secondly, the use of massive fishing nets which caught tuna, the main food of the turtles, and which also killed many turtles who got caught up in the them.

Admirably they pulled together to address this issue by launching a campaign under the slogan ‘No nature, no life.’ As a community they cleaned up the beach, sectioned off areas solely as breeding areas and banned the use of nets locally. Since then 1600 baby turtles have been born there and toddled off into the sea. This really is a success story, and shows how a small group of people can make a huge difference.

I stayed in a beach hut about 50 metres from the sea, aptly named ‘Wipeout’, as if there had been a tsunami, I would most definitely have been ‘wiped out’. My room was basic, to say the least. The roof and walls were made of bamboo which meant that I shared my accommodation with a variety of other creatures namely cockroaches, and unidentifiable critters, who thought it was great fun to trampoline on top of my mosquito net at an ungodly hour.

I know that cockroaches hide in the daytime so I slept with a high power torch on, just to spoil their nocturnal fun. Not that I spent much time in bed. I had to be on the beach for 6am to pick up rubbish of all descriptions. One new addition to the predictable assortment plastic pollution were face masks. God knows how many I picked up.

The more interesting part of this early morning sortie was hunting for the turtle nests. These could be spotted by a trail of flipper prints from the sea up the beach, and where they stopped, before heading back, was where the mothers had laid their eggs overnight. At this point we dug down with our bare hands to a depth of about 30cm and Hey Presto! Each time we found up to 120 perfect white eggs, the size of golf balls. These were carefully exhumed and buried in a new hole made further away from the sea.

As it takes 3 months for the eggs to hatch many nests are simply washed away before the babies appear if they are not relocated. Our new nests were clearly marked with big signs stating the date and the amount of eggs. This was so different from my experience in the  Maldives, where we concealed any traces of nests, as the locals would dig the eggs up and eat them!

This chronic shortage of other willing bodies meant I featured very heavily in all of their work whilst being forced to wear a size XXL promotional T-shirt. I was filmed doing everything from picking up rubbish at 6am whilst ‘smiling’, to learning how to make a basket whilst ‘smiling’, to painting  a wall with whitewash whilst ‘smiling.’ I am not sure that a video of one over age blonde volunteer, in a baggy T-shirt with a demented smile, is actually going to put this place on the tourist map. But I will be charging royalties.

After a week in this tiny remote village where no one spoke a word of English, and there was absolutely nothing to do after the early morning work, apart from sitting on the beach and counting cockroaches, I decided that I just had to move on. So I left. 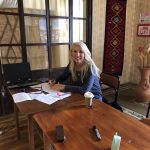