I know I haven’t mentioned the food since I have been in Nepal and there is a good reason for this…. There isn’t any.  So much for delicious Nepali dishes.

If any lady readers are considering shedding a few pounds in time for Christmas, sod the 5:2 diet, come to Nepal for instant and dramatic weight loss. So swift has been my shrinkage that some of the ‘Glamorous Granny’ linen clothes I bought only 4 weeks ago are way too big.

Yesterday I was bending over the table in the classroom when 3 little gnomes starting tugging on the backs of my trousers legs to get my attention. They got more than they bargained for, as my black tie-waisted peg leg chinos gravitated south with alarming speed. I then revealed my knickers to Kathmandu Kindergarten. Thank God for bucket pants.

On the night I arrived, I went down for dinner and queued up to be given what looked like two skimpy side orders from the Lingfield Tandoori; one rice and the other curried potatoes, served on a metal plate. Well this is a Compound with a capital ‘C’.   I sat down and realised that I had forgotten to get a knife and fork, only to be told by a fellow inmate that there weren’t any!

I looked around in disbelief and noticed people squashing the rice and slop into golf ball shapes and stuffing it messily into their mouths, leaving trails down their chins and T-shirts. This was an utterly shocking and gross spectacle, and one I did not want to be a part of. So I came up with a solution.

I mixed the two baby portions together and scooped the mess onto my solitary poppadom, like a Nepalese open sandwich. ‘Just brilliant’, I thought, but then it all went horribly wrong. Halfway between table and mouth my precious poppadom collapsed, and I ended up with a curry car crash on my plate.

I took one look at the wreckage, and sought comfort in my room, with the rest of my tin of travel sweets. Lunch and dinner are pretty much the same every day, just a different poor and unsuspecting vegetable has been chopped, stewed and chillied to make these dull, bland Nepali dishes.

I have now actually got used to eating with my hand. I do try to do it as elegantly as possible, then spend the rest of the day picking spinach from behind my painted finger nails. Yes, painted! I haven’t gone totally native yet…

There has been one saving grace in this food fiasco, and that is that the local shop sells a vast selection of Cadbury’s and McVities products, amongst the spices and weirdly shaped vegetables.

I buy at least 2 bars of Dairy Milk a day, at £2 a go, and convince myself that I could easily do that on Lattes in Lingfield. The other fantastic find is Instant Cappuccino. It bears no resemblance to the real thing, but it contains caffeine and saves all the faff of trying to locate sugar and cow’s milk. Amazing!

When I was packing to come here I realized that the box of 240 PG Tips was just not going to fit into my rucksack, no matter how hard I stamped on the box. Friends did comment that it did seem a little strange taking tea to India, but as far as I am concerned it is not TEA unless the leaves have been through a factory in Manchester.

I am pleased to say that I have now located Twinings Breakfast Tea at a vastly inflated price which, when mixed with Coffeemate, makes a half decent cuppa. I could almost be back on a building site with my guys at home…

Another issue with meals which makes them even more unpalatable is the Gap Year Girls. Outside shoulders and knees must be covered at all times, as a sign of respect, but in the Compound anything (or should I say nothing) goes.

I have to sit with my plate of mush looking at young, tanned beauties in cropped tops and micro shorts. Unsurprisingly, the young, male Nepali project coordinators appear with the same punctuality as the flies at meal times.

Last night I was chuffed when Bhumi, a cute Nepali, started to chatting to me instead. ‘Hey, Miz Jayne, do you have a photo on your phone of you in your twenties?’ He asked.

I pointed out that mobiles had barely been invented then. To which he replied ‘Oh that’s a shame, I bet you were pretty then.’ I reacted like any woman my age would. I went upstairs and ate a whole packet of Chocolate Hobnobs… 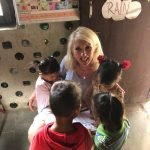 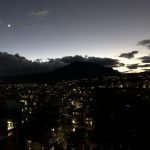